Restoring stability and mobility to your life.

The ligaments you see in the video connect our joints and are a critical part of them operating as nature intended.

There are ligaments in the hip joint, although our clinic focuses entirely on ligament reconstruction for the knee. The strength and stability this joint provides is controlled by four major bands of tough, elastic tissue:

Sports injuries are a common way to tear or damage ligaments, the kneecap (patella) or cartilage. This can also happen through a variety of accidents or activities and, in each case, reconstructive surgery can achieve a lasting repair and allow return to full fitness.

A thorough consultation will help to establish whether other options are an answer, or ligament reconstruction is the best solution. The range of treatment we provide covers ligaments and other areas within the knee. 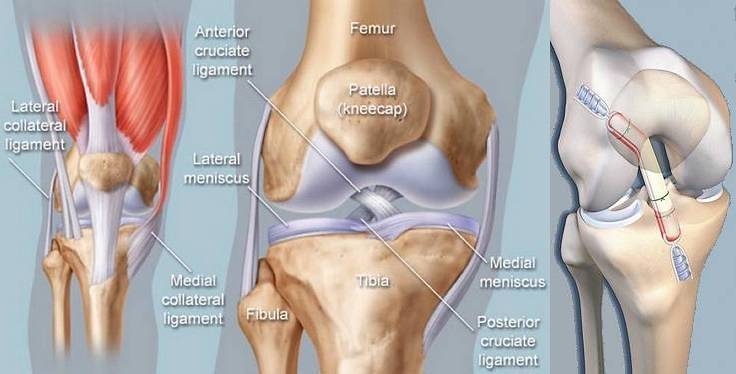 The Anterior Cruciate Ligament (ACL) - The most common ligament to be injured. This can be stretched, or torn due to a sudden twisting movement, or damaged by slowing down quickly, or when landing from a jump.

The ACL can be reconstructed, for which we use the TLS "all-inside" single hamstring, short graft technique. A single tendon is used, avoiding much of the hamstring weakness many patients experience with the traditional "two tendons" technique.

The tendon is harvested via a small cut on the upper aspect of the shin, then passed into bone tunnel sockets in the shin and thigh bone (tibia and femur - see image above). After tensioning and firmly fixing with surgical screws, strength and movement are returned.

This modern, effective approach is well proven and enables recovery of knee stability and return to activity. Physiotherapy after surgery is still vital, a physiotherapist will visit before the operation, to explain what to expect in the weeks to come and provide a detailed, post-operative plan.

The PCL is at the back of the knee and injury is quite common, often from direct impact, such as in a traffic accident or a tackle during sports. A blow to the side of the knee can damage the MCL or the LCL.

Although unusual, significant trauma can damage more than one ligament at the same time, with surgery required to repair them.

The latest, proven operating techniques are used, with rapid recovery a key aspect. Support from a physiotherapist is available at each stage, to help ensure that you move forward in a positive way.

A great deal of care goes into diagnosing your injury and making good treatment decisions. Where surgery is the answer, you will normally be admitted to the Three Shires Hospital in Northampton on the day of the operation.

Details of the surgery, including possible risks and complications are explained by the surgeon, before you provide written, informed consent. Other team members including a physiotherapist will visit before the operation.

Whether arthroscopy (keyhole surgery) is used, as is most often the case, or a more extensive approach, ligament repair is usually performed under full anaesthetic.

Recovery should still be quite quick and most patients will be fit for discharge on the evening of surgery, or perhaps need to stay one night. In either case, weight bearing is encouraged immediately and a knee brace is not usually required.

Stitches will be removed at the first clinic review with your consultant, after about two weeks. Further regular assessments are made during the rehabilitation period, with supervision by a physiotherapist for the first six months.

Depending on the type and complexity of the ligament repair, or other treatment, full recovery and return to competitive sport such as football can take up to a year. However, improvement is steady throughout that period and most people are aware of great improvement in their symptoms within just three months.

Many cases of knee damage can be corrected by ligament repair. Even if age, disease, or damage proclude this, modern implants can provide a long lasting solution following: